Growing up in Wisconsin has instilled in me a deep love for football, and with the regular season starting up last week it felt like the perfect time to share that love with my preschoolers. Planning a football storytime was not easy; there are surprisingly very few football themed picture books. But I managed to come up with a pretty great program that was fun for me, the kids, and even the parents/caregivers.

The first book we read was Miss Nelson Has a Field Day by Harry Allard. I was a bit concerned on how this book would go over, since it is quite long and the humor requires a bit more effort. However, it went perfectly. The group was just the right age for this book’s humor (the few things they may not have gotten, I explained or drew extra attention to), and they handled the length very well.

Next, everybody stood up so we could sing a song. I could not find a song about football, so I settled for “Take Me Out to the Ball Game.” I acknowledged the fact that this song is not about football, but is still about sports, and apologized but let them know that it is a very fun song anyway. I almost think the parents/caregivers were more into this song than the kids, and it always makes storytime better when parents/caregivers are participating enthusiastically.

Take me out to the ball game

Take me out with the crowd

Buy me some peanuts and crackerjacks

I don’t care if I never get back

For the home team

If they don’t win it’s a shame

For it’s one, Two, Three strikes you’re out

At the old ball game

The next book we read is actually an early reader and a graphic novel. I chose The End Zone by Lori Mortensen, because the main character is a girl. Since football can often be seen as a “boy thing,” I wanted to be sure that my storytime didn’t feel to gendered, and also to show that girls can play football too!

Next we did a flannel rhyme. I found this rhyme on Storytime Katie, where she had it presented as a fingerplay. I wanted to use the flannel board, so I made five footballs and a goalpost to go along with the rhyme. When each football made a touchdown I moved it into the goal post. We had a ton of fun cheering and being excited for the touchdown when, in the rhyme, the crowd roars.

One makes a touchdown, hear the crowd roar!

It makes a touchdown, hear the crowd roar!

The last book we read was Fall Ball by Peter McCarty. It’s short and sweet, and it has beautiful illustrations. The kids were getting a little bit antsy by this point, so I’m glad I chose to do this (the shortest book) last. 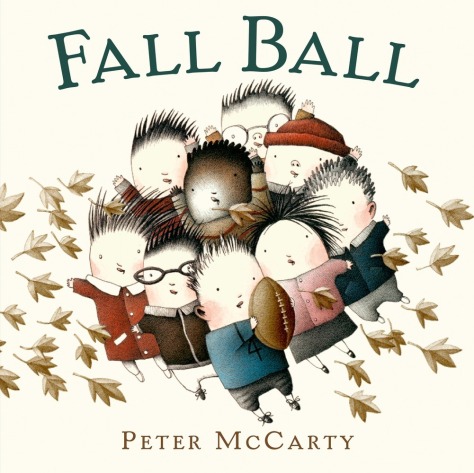 For the craft we made footballs. I got this awesome idea from Mom on Timeout. The kids got to work on their fine motor skills by threading yarn through several different wholes, before stuffing the football with tissue paper. It also was a good way to get parents involved in the craft process with their kids, as most had to help with the threading. And the kids got to leave with their own mini football that could really be thrown around!